Head back to the jungle with a big-screen double-feature of the classic 1995 adventure-comedy JUMANJI together with last year’s blockbuster smash JUMANJI: WELCOME TO THE JUNGLE. This special JUMANJI DOUBLE FEATURE gives fans the chance to see both films back-to-back in the movie theater — enjoying the increasingly rare treat of a cinematic double-feature!
There are only two opportunities to see the JUMANJI DOUBLE FEATURE: at 2 p.m. on Sunday, June 10, or at 6:30 p.m. on Monday, June 11 (all times local). 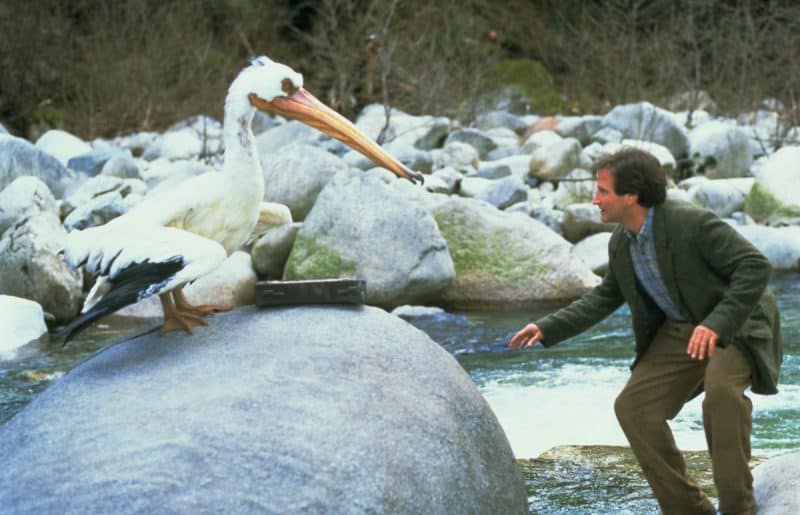 The presentation begins with the groundbreaking 1995 original JUMANJI, directed by Joe Johnston (Captain America: The First Avenger, The Rocketeer), leading into the 2017 sequel, JUMANJI: WELCOME TO THE JUNGLE, which picks up the action where the first film left off, and also updates the laughs for the digital age in the massively popular film directed by Jake Kasdan.
You’ll find all the details of the JUMANJI DOUBLE FEATURE below, and a full list of theaters playing this double-feature by clicking this link and entering your ZIP code (select “See More Theater Locations” at the bottom of the initial list for complete options in your area).
“Jumanji”

“Jumanji: Welcome to the Jungle”

‘Jumanji Double Feature’ Event Offers Twice the Adventure, Twice the Laughs and Twice the Fun in Cinemas for Two Days Only: June 10 and 11

The 1995 Fan Favorite ‘Jumanji’ and the 2017 Mega-Hit ‘Jumanji: Welcome to the Jungle’ Return to U.S. Movie Theaters

Moviegoers will go totally wild when “Jumanji Double Feature” comes to cinemas nationwide this summer for two days only, bringing together the groundbreaking original 1995 adventure “Jumanji” and 2017’s blockbuster comedy-adventure “Jumanji: Welcome to the Jungle.”

Tickets for “Jumanji Double Feature” can be purchased at www.FathomEvents.com and participating box offices.

Fathom Events and Sony Pictures Entertainment bring “Jumanji Double Feature” to nearly 600 U.S. cinemas on Sunday, June 10, at 2:00 p.m., and Monday, June 11, at 6:30 p.m. (all local times). A complete list of theater locations is available on the Fathom Events website (theaters and participants are subject to change).

“Jumanji” stars Robin Williams, Kirsten Dunst and Bonnie Hunt, and is directed by Joe Johnston (“The Rocketeer,” “Captain America: The First Avenger”) and produced by Scott Kroopf and William Teitler, with a screen story by Greg Taylor & Jim Strain and Chris Van Allsburg and a screenplay by Jonathan Hensleigh and Greg Taylor &Jim Strain, 1995’s “Jumanji” was one of the year’s highest-grossing films. Its tale of an ancient, magical board game that comes to life went on to become one of the films most associated with the decade, combining Williams’ comedic genius with seamlessly integrated computer-generated effects. Through home video releases, an entire generation has grown up with “Jumanji” – but many of its fans have never seen it on the big screen.

In “Jumanji: Welcome to the Jungle,” the game has changed as four teenagers in detention are sucked into the world of Jumanji. When they discover an old video game console with a game they’ve never heard of, they decide to play and are immediately thrust into the game’s jungle setting in the bodies of the avatar characters they chose (Dwayne Johnson, Jack Black, Kevin Hart and Karen Gillan). What they discover is that you don’t just play Jumanji – Jumanji plays you. To win, they’ll have to go on the most dangerous adventure of their lives or they’ll be stuck in the game forever. Directed by Jake Kasdan, with a screen story by Chris McKenna and screenplay by Chris McKenna & Erik Sommers and Scott Rosenberg & Jeff Pinkner, “Jumanji: Welcome to the Jungle” is produced by Matt Tolmach and William Teitler.

Both films are based on the 1982 Caldecott Medal-winning book “Jumanji” by Chris Van Allsburg.

“An entire generation has never experienced the fun of a double-feature in the theater, enjoying movies that are really special to see on the big screen,” Fathom Events Vice President of Studio Relations Tom Lucas said. “’Jumanji’ and ‘Jumanji: Welcome to the Jungle’ are so perfectly suited to a double-feature, each enormously fun in its own right and both part of a fantastic ongoing adventure.”