Join my newsletter list to be the first to hear our latest news!
Home | Family | Frozen A MUST Watch Disney Movie

Frozen A MUST Watch Disney Movie

Frozen A MUST Watch Disney Movie!! While on my trip to Los Angeles we were the first group outside of Disney to have the honor to watch parts of Frozen. I was on the edge of my seat the entire time and I have been busting at the seems to tell everyone all about it. But I had to be quiet until today, and boy howdy was that a long time to wait. But I do promise this, Frozen is a MUST Watch Disney Movie this Thanksgiving.

Teaser Trailer, I love Olaf and Sven!
Frozen is an animated comedy and adventure that Walt Disney himself wanted to produce from the book Snow Queen. I loved that even years after Walt Disney’s death his “staff” if you will, carry on his wishes and continue to make Disney magic. Frozen includes voices from Kristen Bell, Idina Menzel, and Jonathan Groff to name a few. Chris Buck and Jennifer Lee were the directors and the producer is Peter Del Vecho. They all have done a fabulous job with this movie and here is just a few of my favorite sneak peeks I’m allowed to share with you!!

We were told that we needed to use our imagination in some parts because the film was in rough form. One of the things that sticks out most in my mind is the lantern that didn’t have any fire. But I do have to admit that seeing the frames unfinished was just as impressive as a finished Disney movie. The 3D effects were amazing and the story line was absolutely perfect and the characters all have their own unique story that forms together to make the movie complete.

The setting takes place in a small village called Avendale where the art director took a trip to Norway. This made him become more in tune with the setting and therefore allowing him to see Mounting men harvesting ice just like the old times and then the story line was put into place. Ice is not only beautiful but powerful in this amazing movie.

When we first heard that Elsa was to be afraid of the frozen heart it didn’t make much sense. However, as the story unfolded and the kingdom below was placed in an eternal winter it started making more sense. Ana whose voice is Kristen Bell sets off on a journey with a rugged mountain man Kristoff and his reindeer Sven. Along their journey to save Anna’s sister Elsa they encountered Everest like conditions, mystical trolls and of course Olaf who would help save the kingdom below.

This movie is not only magical but a story of character of diverse backgrounds put together fight a common battle that is often won with love, hard work and dedication.

There is also a “short” film that has some very special features that will be on before Frozen. It is a much watch as well with several “surprises” that will keep you on the edge of your seat! The short was just as good as Frozen! Be sure to check out the trailer below too!!

<
Be sure to check out Frozen on their Website, Facebook and Twitter! As well enter in the Frozen Olaf Hula Sweepstakes that ends 12/31. And the poster for Happy Sister’s Day and of course  the newest poster of Frozen!

In celebration of today’s release of Disney’s FROZEN on Bluray combo pack please see below for fun friendship activities inspired by the film! Make your own princess capes and honor a relationship with a sister or someone who is like a sister to you with sister bracelets!
Also, check out an interview with the hair genius behind Elsa’s lovely locks! Celebrity hairstylist Danilo discusses what it’s like being part of the Disney family, how he came to be involved with the film, how to recreate Elsa’s do and much more!

Now Available to Own on Blu-ray™ Combo Pack & DVD

Featuring a Blizzard of Fun-Filled Bonus Features, Including Deleted Scenes, Making-of Featurettes,  “Let It Go” Music Videos, Theatrical Short “Get a Horse!” and Much More! 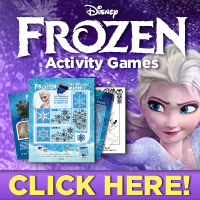 Winner of the 2013 Academy Award® for Best Animated Feature and Best Original Song (“Let It Go”), this wondrous tale of a young girl trying to save a kingdom trapped in eternal winter arrives just in time for spring and features even more adventure, more extras, and more Olaf!

After casting a $1-billion-dollar spell at the global box office, this heartwarming fantasy adventure enchants viewers like never before on Blu-ray, featuring crystal clear high definition picture and sound, plus a blizzard of fun-filled bonus features, including the behind-the-scenes documentaries “The Making Of Frozen,” and “D’frosted: Disney’s Journey From Hans Christian Andersen to Frozen.” Additional bonus features include 4 Deleted Scenes with introductions by directors Chris Buck and Jennifer Lee, the Academy Award® nominated theatrical short “Get A Horse!” “Let It Go” music videos by Demi Lovato, Martina Stoessel & Marsha Milan Londoh, “Frozen” Teaser Trailer, and much more! Directed by Chris Buck (“Surf’s Up,” “Tarzan”) and Jennifer Lee (screenwriter, “Wreck-it Ralph”), produced by Peter Del Vecho (“The Princess and the Frog,” “Winnie the Pooh”), and written by Jennifer Lee, “Frozen” is the seventh Disney-released film to reach $1 billion—and the first for Walt Disney Animation Studios. It features original songs by the Academy Award® winning duo Kristen Anderson-Lopez (“In Transit,” “Winnie the Pooh”) and Robert Lopez  (Tony® Award winner, “The Book of Mormon,” “Avenue Q”).

In “Frozen,” fearless optimist Anna sets off on an epic journey — teaming up with rugged mountain man Kristoff and his loyal reindeer Sven — to find her sister Elsa, whose icy powers have trapped the kingdom of Arendelle in eternal winter. Encountering Everest-like conditions, mystical trolls and a hilarious snowman named Olaf, Anna and Kristoff battle the elements in a race to save the kingdom.

Bonus Materials Overview for These Products:

Bonus Materials for This Product:

Hey! It is nice to meet you!

Affiliate Disclaimer We work with a variety of different affiliate companies. This means that we will receive a small compensation if you purchase from one of our affiliate links. This will not affect the price of your item(s)."As an Amazon Associate I earn from qualifying purchases."