Join my newsletter list to be the first to hear our latest news!
Home | Family | Crafts and Recipes Inspired by Tinkerbell Legend of the Neverbeast

Crafts and Recipes Inspired by Tinkerbell Legend of the Neverbeast 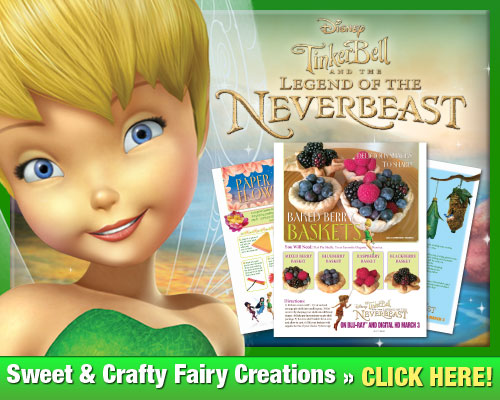 Crafts and Recipes Inspired by Tinkerbell Legend of the Neverbeast! This amazing movie that will hit DVD on 3/3 and kids everywhere will be  going fairy crazy! Fawn is an inspiration and animal lover like no other! But the Neverbeast is a magical character that is there to save Pixie Hollow, but it doesn’t seem that way at first!

“KT is a celebrated songwriter and musician,” says director Steve Loter. “She reminds me of Fawn in a way with her big heart and this amazing voice that has a little bit of edge and a tremendous amount of appeal.” 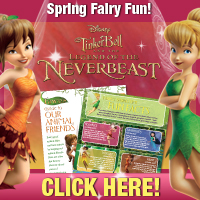 The all-new Tinker Bell film is about the relationship that develops between Fawn, a compassionate animal fairy who thinks with her heart, and Gruff, a massive beast with glowing green eyes who seems to be on a mission. “It’s a real action-adventure movie,” says Tunstall. “The characters are so cool. I was over the moon to take part. Disney Animation has such an incredible heritage of work, spanning decades, and it’s really special to be part of that.”

Tunstall had fun channeling the film’s heroine. “‘Float’ is Fawn’s opening theme,” she says. “It’s fantastic how she spends her days looking after all the animals around Pixie Hollow. The song says, ‘I’ll just float.’ She doesn’t have to have a reason, she just really loves having a pair of wings, so she’s going out for a fly, getting into trouble and mischief.”

The artist also helped introduce the NeverBeast. “‘Strange Sight’ is heard when Fawn discovers this beast living in the woods near Pixie Hollow,” says Tunstall. “He’s a huge, scary-looking guy, but she isn’t afraid. She wants to help him and make friends with him, but can’t work out what he is or what he’s doing with the rocks he’s collecting.”

The third song in Tunstall’s lineup, which she sings with singer/songwriter Bleu, is an emotional song that can be heard during the film’s end credits.

Tunstall has recorded five studio albums and received multiple Brit Award nominations including a win for female solo artist and a 2007 Grammy® nom for the song “Black Horse and the Cherry Tree.” Her hit “Suddenly I See” was featured in the motion picture “The Devil Wears Prada,” which led her to her interest in composing for film including “The Kid,” “Winter’s Tale” and a collaboration with A.R. Rahman on the song “We Could Be Kings” for Disney’s “Million Dollar Arm.”

“Float” – music and lyrics by Bleu

Hey! It is nice to meet you!

Affiliate Disclaimer We work with a variety of different affiliate companies. This means that we will receive a small compensation if you purchase from one of our affiliate links. This will not affect the price of your item(s)."As an Amazon Associate I earn from qualifying purchases."